As a first generation Cuban-American, Alfred Pérez grew up in a home that practiced a Nigerian born – Afro-Cuban religion called Lucumi-Yoruba. The subject matter of his work certainly includes that iconography, such as the cowrie shells and the representation of deities with the combination of certain colors and symbols. At the same time they were also practicing Catholics. This melding of not only religions, but of people and social classes is an important reason for the density and variety of Afro-Cuban elements in his artwork.

In addition, his paintings deal with other images relevant to his lifestyle and political views. They are both figurative and abstract. All having narratives, although not always immediately clear. Pérez’s paintings are a patchwork of negative and positive spaces speaking to a number of personal and social issues including freedom, justice and equality. Painting about different aspects of his life, historical and present, gives him a great deal of personal satisfaction. Being a native South Floridian, he feels no other American region gives him the same connection to his roots. The opportunity to live that reality is amazing, and fuels his passion to paint here. Pérez calls this series etched oil on canvas. A finely textured/etched/raised surface of oil on canvas, that once cured is reminiscent to the wood and marble carvings/etchings of African artisans. The subject-mater is drawn from the realm of memory, imaginative fantasy and even the irrational, often in a whimsical or humorous quality, containing images of playfully distorted animal forms, twisted organic shapes, deconstructed flags and/or symbols and odd geometric constructions. 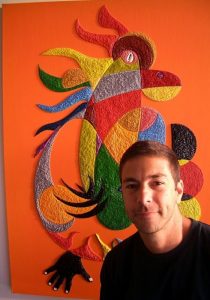 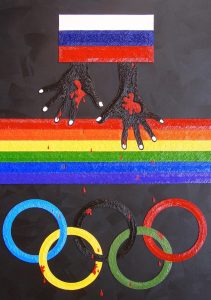